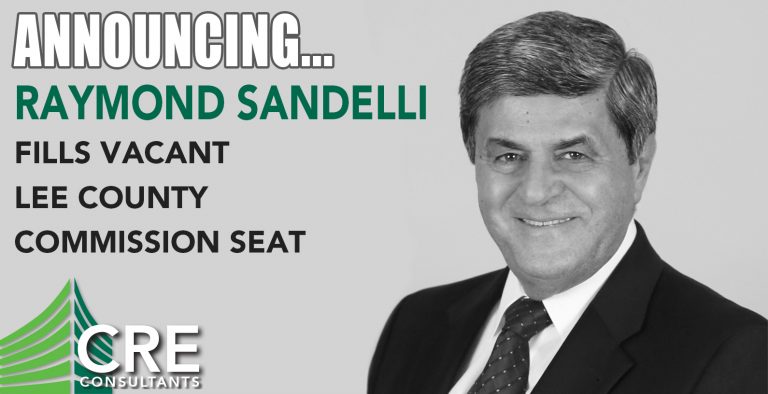 “Today I named Raymond Sandelli, of Bonita Springs, to serve on the vacant seat of the Lee County Commission,” said DeSantis in a prepared statement. “Although he did not seek this position, he has graciously accepted to the call to serve. Raymond’s great business and military background will be of benefit to the community. In addition, he will do a good job protecting taxpayers and attending to the needs of businesses as well.”

He will be sworn in at the commission meeting Tuesday. “I am grateful to Governor DeSantis for asking me to serve on the board of the Lee County Commission,” Sandelli said in the announcement from the Governor’s Office issued Friday. “I look forward to serving the constituents of Lee County alongside my fellow commissioners, a responsibility I do not take lightly. This is a great honor and I thank Governor DeSantis for his leadership.”

A resident of Bonita Springs, Sandelli was not among more than a dozen others who had filed applications for the post. He is managing partner of CRE Consultants, a commercial real estate brokerage with a local office in Fort Myers.

“I didn’t seek it out necessarily,” Sandelli said. “I was asked if I would consider serving and I said sure.”

More than a dozen county residents had formally applied for the position, including Kiker’s widow, Paula Kiker, who has filed to run as a candidate for the District 3 seat in the 2020 election.

Sandelli, who will turn 71 next Friday, has spent more than 40 years in real estate in markets around the country, beginning in Seattle, and making his way to Southwest Florida through a position in Tampa seven years ago.

“I always loved the Gulf Coast,” Sandelli said. “I came down here originally with the idea of spending maybe a year or so and like most people when I got down here I found it was an attractive way of life.”

A 1970 graduate of Monmouth University in New Jersey, Sandelli served nearly 9 years in the Navy, capping his career as one of the aviators in the Blue Angels flight demonstration group. He serves on a committee that evaluates candidates for appointment to the United States Naval Academy.

Sandelli said he has not made a decision whether to seek a full term on the commission.