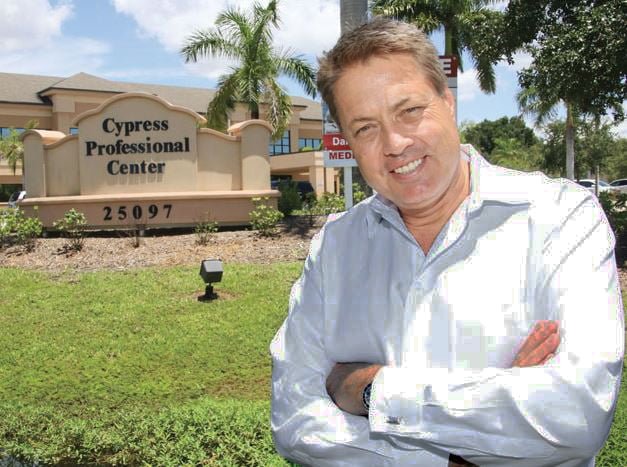 Enn Luthringer, a partner in commercial real estate brokerage firm CRE Consultants, in Fort Myers, has been in commercial real estate for more than 15 years. He’s worked for CRE and engineering firm Wilson Miller, where he worked as a land planner on such diverse projects as Grey Oaks, the upscale community developed by Barron Collier Cos. and Lutgert Cos. Today, he specializes in office and medical office buildings for CRE throughout Southwest Florida. A native of Buffalo, N.Y., Luthringer also earned a Florida Contractors License and earlier this year received the prestigious CCIM Institute designation. He has worked with clients ranging from Bank of America to Lee Memorial Health System.

Give us your perspective on the Southwest Florida office market – healthy, robust, frothy, overheated — and why?

We’ve seen pretty steady growth over the past few years, and we had a good bump at the start of 2017, the result I believe because the election was over and the uncertainty attached to it. And now, from both the investment and leasing side, we’ve had a few really good quarters and there’s been especially a lot success and activity in the Class A office market, particularly in the University Park area, where we’ve grown occupancy from 55% to over 80%; we’ve had leasing of between 20,000 square feet and 24,000 square feet a year. It’s been a battle at times but it’s a great project with an owner who’s been willing to put money into when needed. Overall, rates have been increasing across class lines, and vacancy has been decreasing. The medical office submarket throughout the three counties, meanwhile, is even tighter. There, the trend has been to diversify out toward retail spaces, because they often have easier access for the consumer, great parking, access and visibility, all those things that service providers look for. Lee Healthcare, for instance, has brought a lot of services back into their hospitals of late, like cancer treatment, which has, in turn, pushed a lot of services out to more non-traditional and alternative locations. In the Class B and C markets, we’re seeing a flight by tenants to better locations. We’re also seeing less square footage per employee, more collaborative spaces, and more efficient use of space overall. The Southwest Florida market is largely governed by tourism and homebuilding and professional services such as attorneys, mortgage companies, financial planners, with corporate headquarters like Hertz and Universal Trailer scattered in, who are relocating here for the lifestyle and the sunshine and the beaches and other amenities.

What trends are you seeing this cycle that are new to the market?

I think the new office layout approach has been the biggest change, the shift to collaborative workspaces has been the biggest new thing. We’re seeing that quite a bit. One tech company I know that moved here, they have foosball tables and a coffee bar in their offices, none of the employees wear ties, and most ride their bikes to work. But they also work hard and work long hours. At the same time, companies here are operating in a little bit smaller offices and making use of space as efficiently as possible. Many companies now also have high-tech conference areas equipped with white boards and other electronics and noise reduction systems, and smaller IT rooms. And as mentioned before, there’s a been a flight to quality, especially from C and B buildings to A space. Everyone is thinking about it, whether they move or not. People feel they have to keep their employees happy and near amenities. That’s a big shift. When I first got into business, what mattered was whether the office was close to the boss. Today, the office needs to be close to everyone’s house, and to clients.

Where do you think the market will be a year from now, in terms of absorption, activity and development?

I think we’ll continue to see slow and steady growth. We’ll likely see higher interest rates, but there’s still a great deal of money on the sidelines and a lot of investors are beginning to look at tertiary markets like Southwest Florida as never before, because of a lack of investment product, whereas traditionally they would have focused on Miami or Orlando exclusively. We’re selling a portfolio for AIG now, it’s 14 buildings, and we’re seeing a lot of activity from buyers who normally wouldn’t consider Southwest Florida. I predict that going forward we’ll see further increases in rental rates; not crazy increases, but gains, especially in Lee County. Collier County I think will remain somewhat flat, but only because rental rates there spiked up in 2016 and may have topped out, for now. In Charlotte County, there’s so little product there, but I see that area as an up-and-comer, even though the numbers often don’t make sense in some cases now. A year from now I think we’ll be seeing new development in both Lee and Charlotte counties.

What’s the most interesting or surprising deal you’ve worked on in the past year?

The interest level in the Cypress Professional Center, in Punta Gorda, really surprised me. That project was master leased, and the master tenant defaulted and the property ultimately went back to the bank. That’s where I came in. National Bank of Commerce, from Birmingham, Ala., hired CRE to undo all the leases in the building, many of which were subleases, and at the time the building was like 40% occupied. So I spent much of 2016 undoing leases there and leasing space to two new tenants. That proved to the market that there actually was demand. From there, we brought it to market, and it sold within 90 days at a 7.3 cap, $117 per square foot. It was interesting because, unbeknownst to a lot of people, I think, we were able to create value and show there was a need. We filled a void in the market. Now, it helped that it was super nice product. But a local group of investors from Charlotte County ultimately bought it, and it closed in March.

With all the population growth in Lee County, in particular, has that translated into new office space?

We’re seeing a lot of population growth and activity through Southwest Florida International Airport, which bodes well for the future. They had a record May for travelers, in fact. We’re also seeing a steadier population in the summer, less fluctuation, and baby boomers are beginning to retire here. We have seen, and will see, further growth in the office market as a result. Of course, office tends to lag other commercial real estate sectors. In other words, retail and industrial space are impacted first and office last.